I made a few dresses last month for Miss J.  She likes all of them, and decided to wear the one with the red trim to school today. 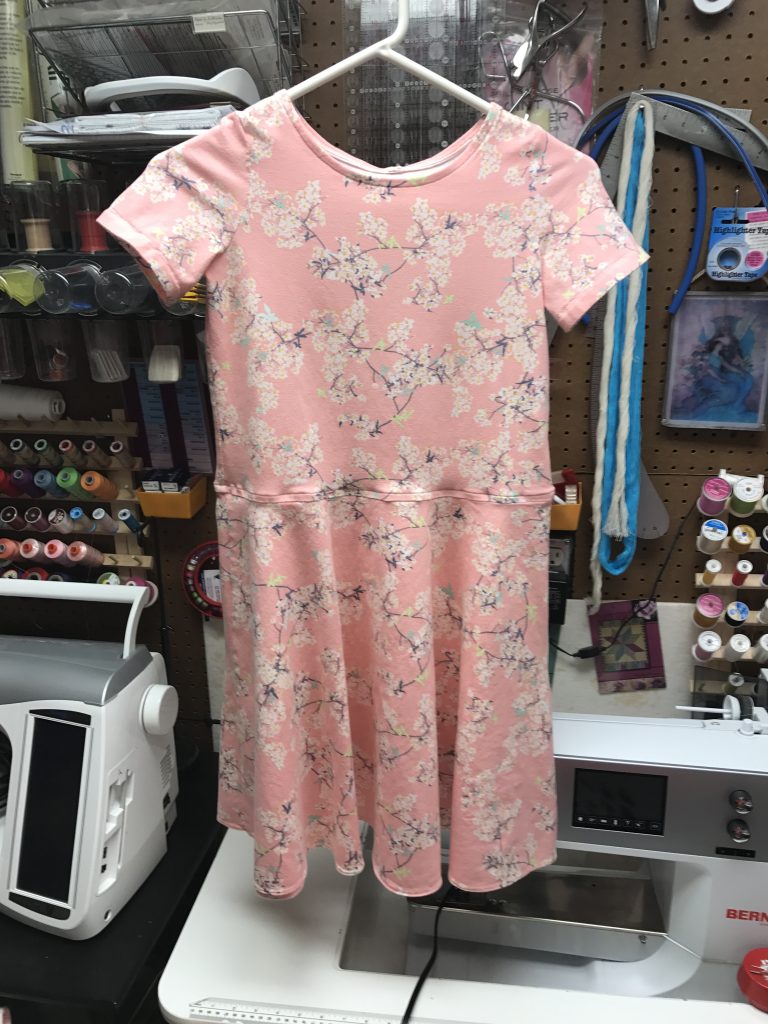 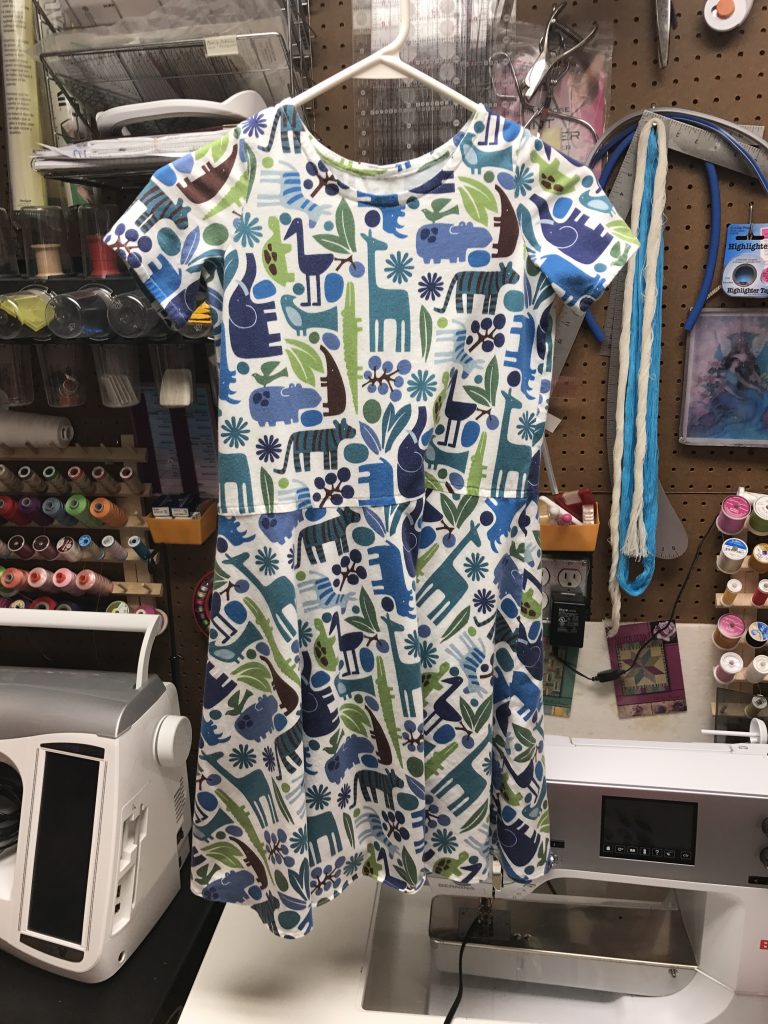 Finally I found a table made for my vintage Viking sewing machine. They look fabulous in my sewing studio! 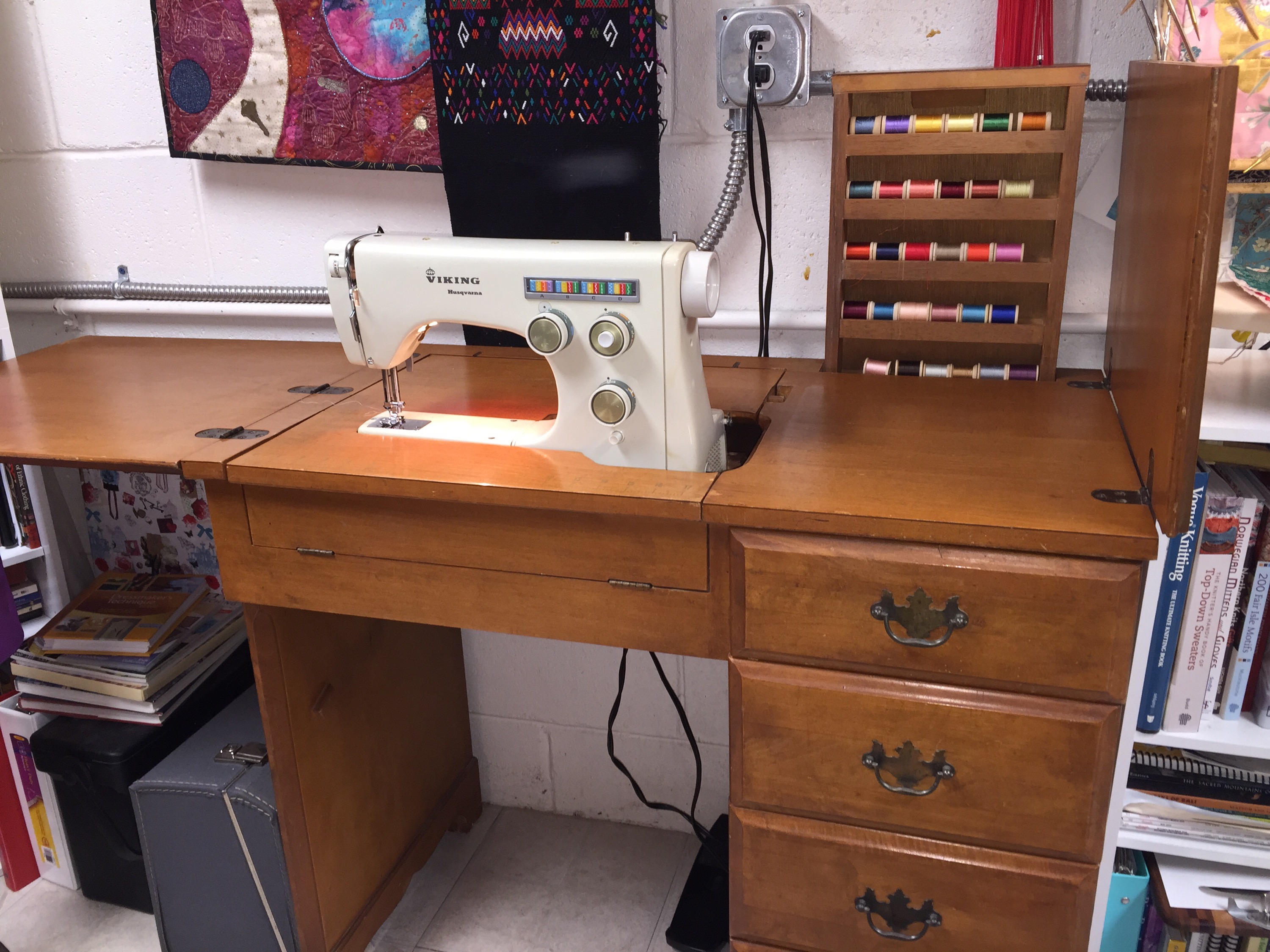 So, it finally arrived.  Juliette’s first day of school.  After a flurry of scheduled activities to get her and us ready for today, she woke up this morning eager to get dressed and get going.  And I have been fine through it all.  Nary a tear and not even really feeling sad, primarily because she was SO happy and excited to start.  It’s hard to feel sad for yourself when your kid is so full of joy over something.  And I must say I held it together really well this morning, until the moment came in the Kids & Company room to hug her goodbye and let her get on with her day.  It just came on like a ton of bricks, all of a sudden.  It felt as though my heart jumped up into my throat, and I could barely breathe and I fought against my feeling until I got out the school door and could let go of the fight.  I had to sit there a while in my car before I was in any condition to drive.  And I’ve been thinking all morning, about how this represents such a major milestone for her, and for us, how this is the first of many little and big acts of letting go, where we continue to love her and care for her with all of our being, but have to ease up on that firm grip we’ve had until now.  As Harald pointed out last night, from now on we will have her to ourselves only a few hours each day as teachers and peers become an increasingly important influence and part of her daily life.  So there is part of me that is so sad to see those first five, precious years end.  And yet, this is what we have wanted all along, to raise a child up to be part of the next generation, a contributing and vibrant member of society, and this is all part of that process.  So it is a bittersweet day, tinged also with plenty of satisfaction and anticipation. 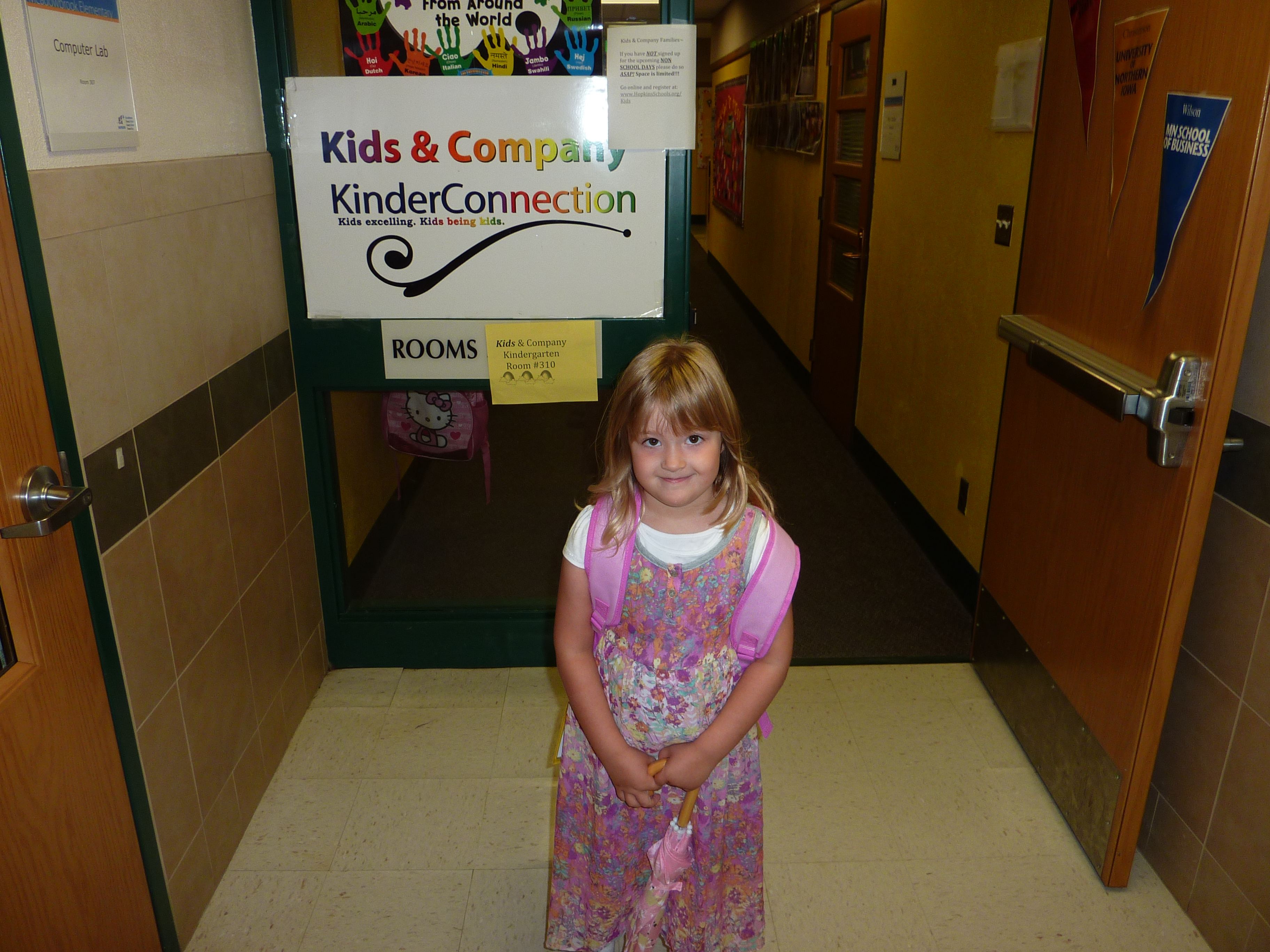 When I saw a package of Tonga Treats Balinese batiks last year, I instantly thought of Inger.  The colors and the life in them reminded me so much of her, I knew instantly I had to make a quilt for her out of those fabrics.  So I bought them and got to work.  I completed the quilt in time to take it to her when we visited her near Beitostølen, Norway this summer.  I had no idea how her house was decorated, and after arriving was afraid it wouldn’t match anything in her decor, so I told her to feel free to take to their home in Cypress or wherever she could use it, but I was delighted to learn her whole bedroom was done in soft shades of pink and the quilt looked very much at home after being put on the bed.  It is a Terry Atkinson pattern, Merry Mosaic, and it was quilted by Mary Brandt. 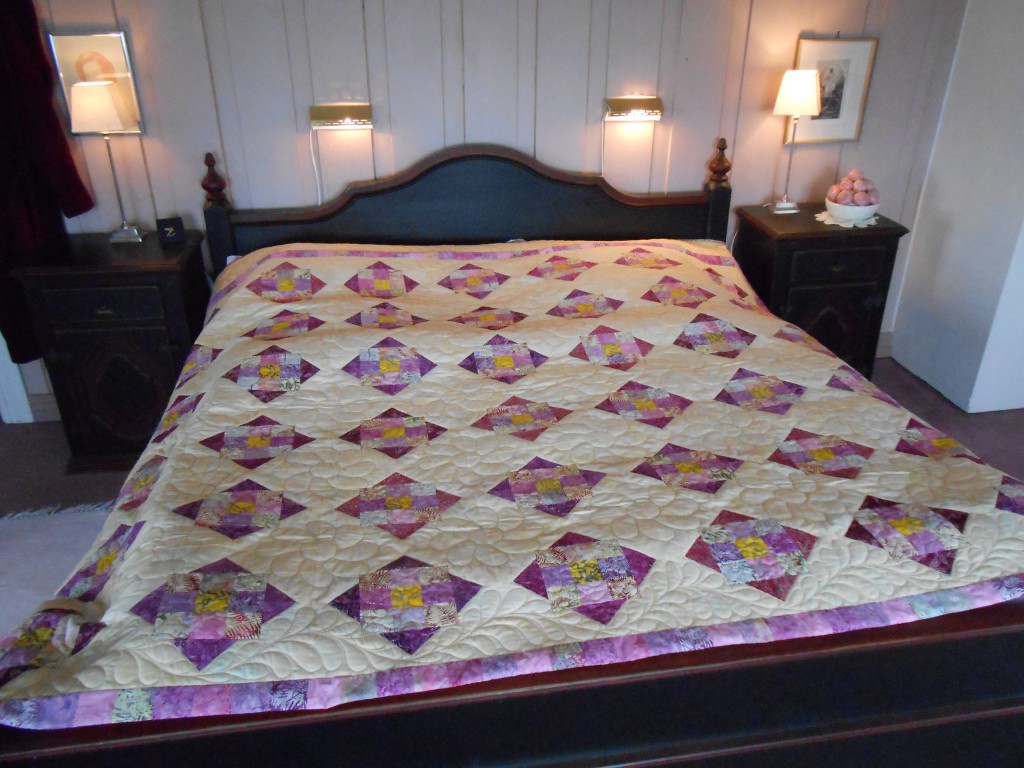 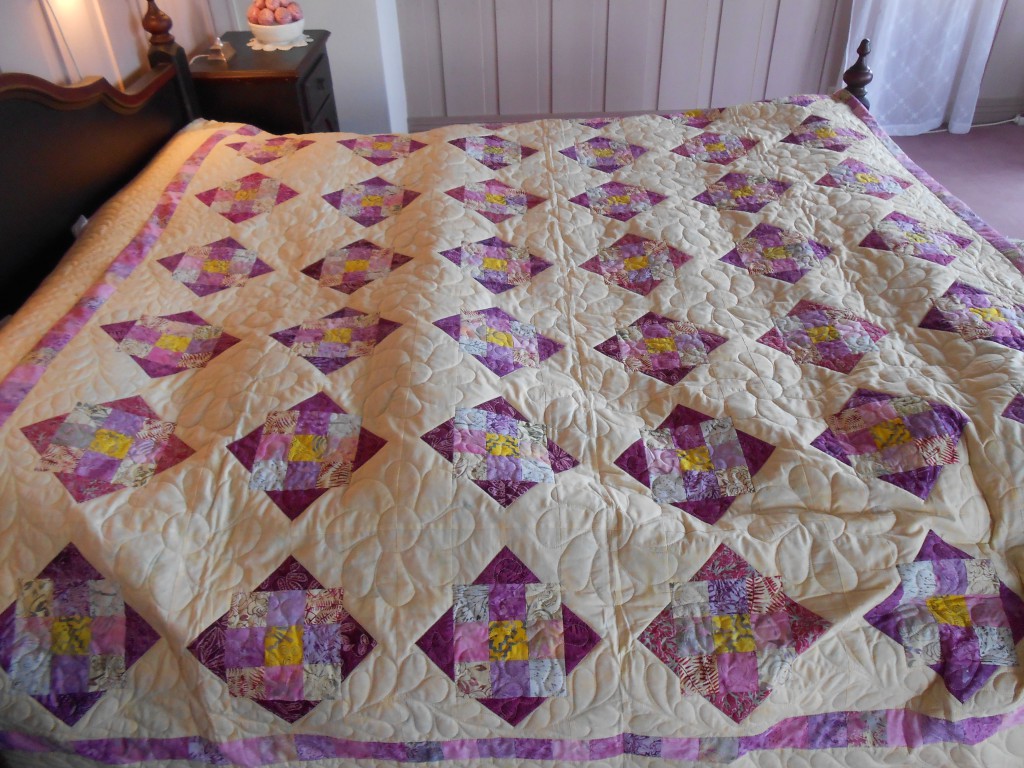 This is a quilt I made for Per & Regula and I took it with us to deliver to them when we arrived in Norway. I’ve wanted to make a two color quilt for a long time, and this one came from a design I saw someone post on Pinterest. It was an easy block to figure out and to make. And it looks gorgeous with the quilting done by Mary Brandt. I am so pleased with how it turned out and I think Per & Regula liked it very much too! 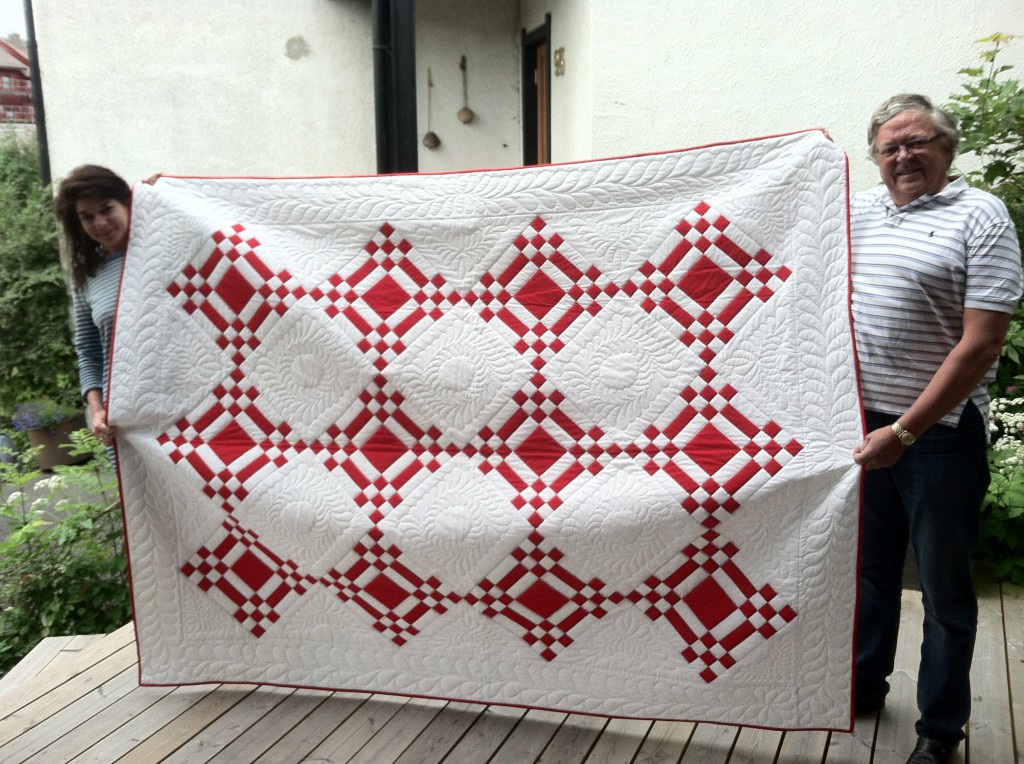 Yes, you read that right.  The two hour dress.  If I hadn’t done the decorative stitching, it would have been the hour and a half dress.  I took the bold and colorful approach, but this dress could be done many different ways, with an heirloom aesthetic or done more simply or embelished in various ways.  But I am getting ahead of myself.

Today was one of those days where I came home feeling and sounding like a bear – and not the cute, cuddly kind.  I don’t know why I felt so out of sorts, but my supply of patience was left wanting and I just felt like I wanted to be left alone for a while.  Yesterday, I had gotten a shipment from Annie’s Catalog of some sewing notions I had been meaning to buy.  Among them was a book called “Quick and Easy Dresses to Sew” and it contained patterns for girls up to age 10.  Juliette got so excited when she saw the book and said the girl on the cover looked just like her.  We looked though it together last night and I promised her that after dinner tonight we would go pick out fabric from my stash.  She showed me what she had in mind, but they were the remnants of her old flannel receiving blankets and I told her I didn’t think with the fabric as worn as it was that would be a good idea.  But I spotted some funky fish fabric in the same bin right below, and suggested we might make her a dress out of that, which appealed to her immediately, no doubt because of the fish tank she set up with her Daddy right after Christmas.  So I measured her before we got her in her jammies, and after we got her into bed I disappeared into my sewing room.  What you see below is the result of two hour’s labor, a pattern called “The Simple Dress” that was fun and easy (and truly simple) to put together.  Made almost comlpetely on my Pfaff Performance 5.0, except that I don’t have a narrow rolled hem foot for it, so I had to do that on my Bernina, but she performed the task flawlessly (the book cheated and had you double the flounce at the botton so as not to have to hem it, but I wasn’t putting up with that!).  The Pfaff is a truly excellent and high-performance sewing machine if ever there was one.  In the slideshow below, you will see some close ups of the fish motif stitch, as well as one of the many quilt stitches, both sewn on the blue contrast band above the wide cuff at the bottom. I sewed another decorative stitch on the yellow bias tape binding around the armholes that tie into bows above the shoulder.  Just when I thought I wouldn’t be able to finish it tonigh (the white and pale blue bias tapes I had clearly were not going to cut it), I found the yellow bias tape hiding in a box of supplies and it was exactly 1 inch longer than the amount I needed – how is that for serendipity?  So this entire dress was made from fabrics, notions and supplies I had on hand, which delighted the part of me that decided a few months ago that my sewing/quilting theme for this year was going to be “use what you got.”  Never mind that snickering over there if you know about my recent quilt store outing with a couple of friends, that’s my theme, and I’m sticking to my story.  I’ve been meaning to write about that here, but I’ve left my blog to the point of neglect recently, so I am hoping to change that soon.

In other news, you will notice I have a new visual theme to my blog.  It was time.  The red a black, while certainly getting your attention, was just a little too severe – and I was just bored with it too.  I needed something different, some more me.  Purple, in all its shades, is much more me.  I hope you like it.  I’m interested in any feedback you might me willing to share.  You will notice one big difference.  The comment links are now at the bottom of each post on the right hand side, instead of being up top under the title like they were with the old theme.

OK, so it’s off to bed for me.  I hope Juliette is pleasantly surprised when she wakes up tomorrow morning and finds that papa made her a new dress while she was sleeping!  And I hope you enjoy the pictures.  The beast has definitely been calmed in the process.

Finally!  I finally finished the pink start I started several months ago.  It’s been sitting in my sewing room waiting for me to finish the hems and make the buttonholes and sew the buttons on.  It is a Simplicity 7030 in XL and is made with one of Anna Marie Horner’s fabrics from Free Spirit, a very fine and silky cotton voile made in Korea.  The quality of the fabric is exceptional.  I used Bottom Line thread for the construction and top stitching because regular 50 weight thread was too big and the shirt really required a little more finesse in the topstitching especially.  I used the sewing journal that someone shared a long time back to record the project details, and I the Japanese basting thread – it worked superbly in basting down fine details, like setting in the collar, doing the hems, basting the plackets on the shirt front – they all just turned out wonderfully.  My only real flaw in the shirt was that I forgot to cut the organdy for the collar on the bias.  I knew better, but that’s what you get for sewing late at night because you have a little one at home.  Since I will never button the collar, it won’t be too bad, but I won’t make the same mistake again.  It fits really just the way I like and I’m very pleased. 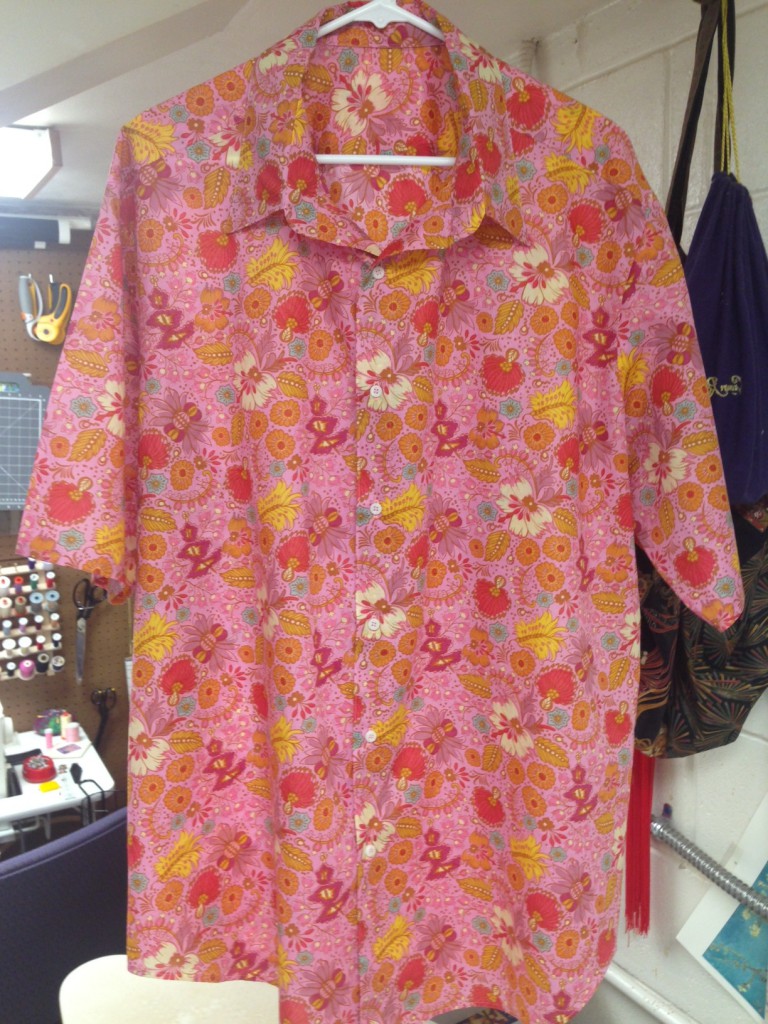 Here are just a few pictures from Juliette’s first communion service yesterday at Central Lutheran Church in Minneapolis.  She did so well, and we were so proud of her. 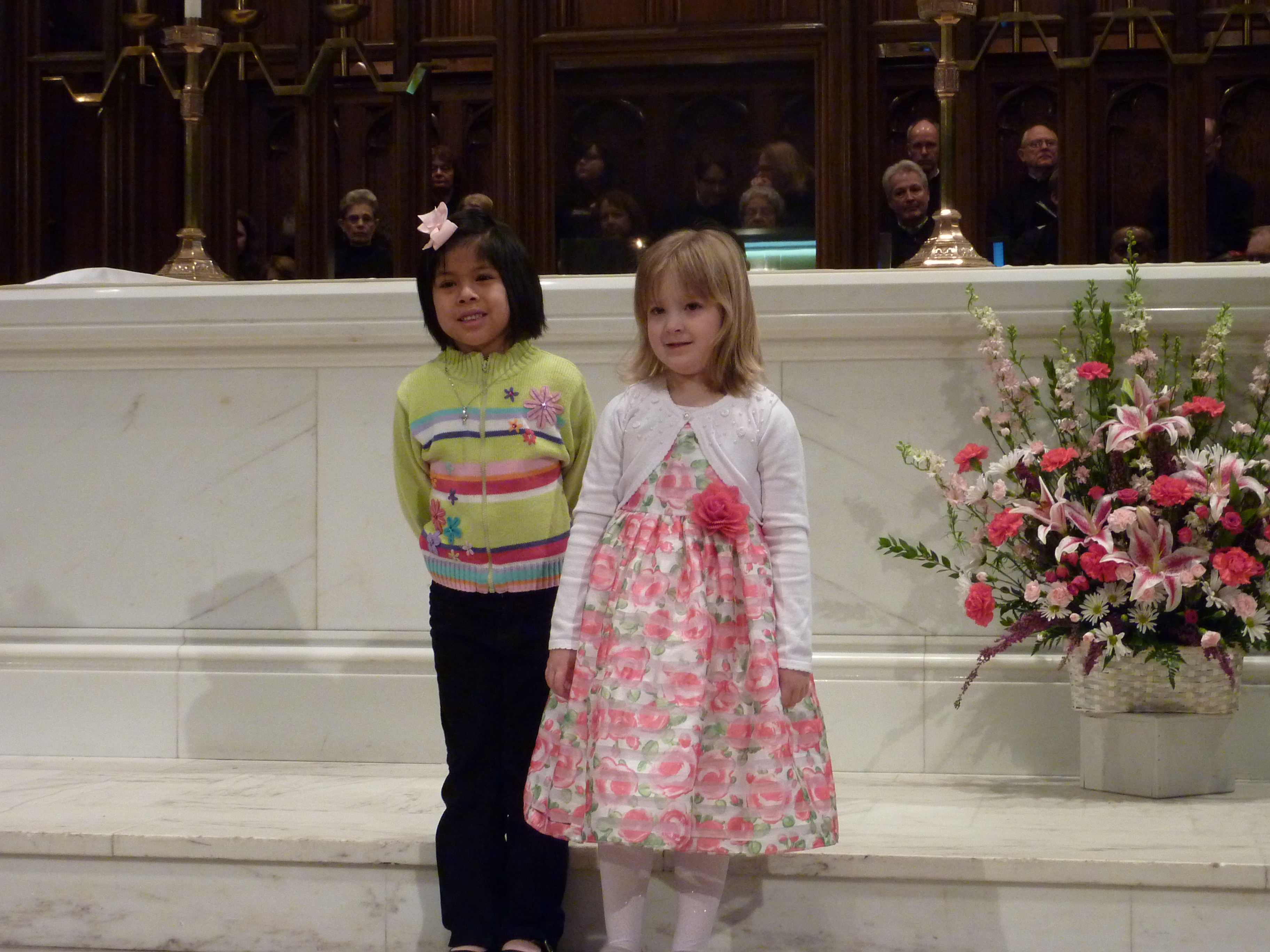 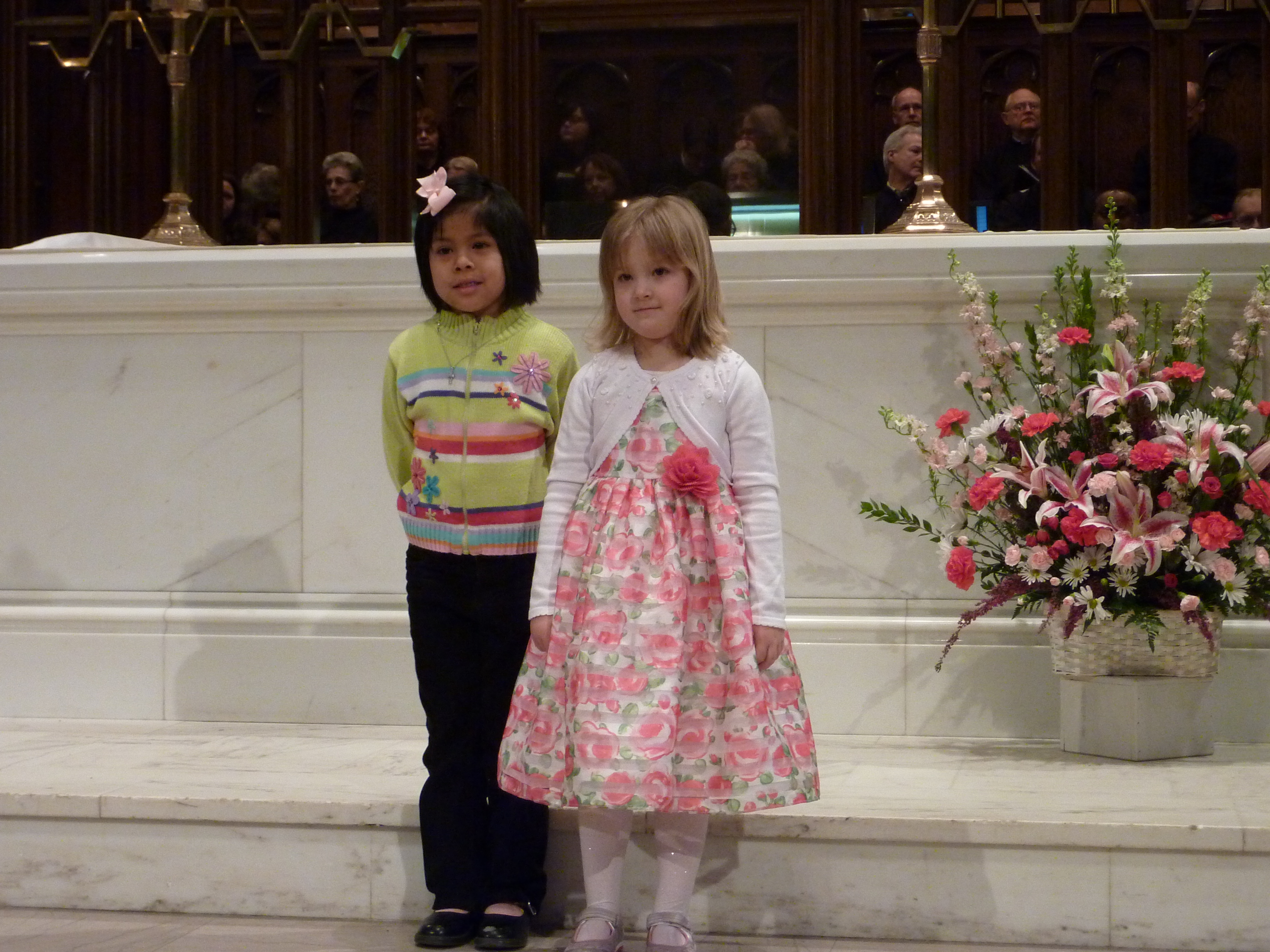 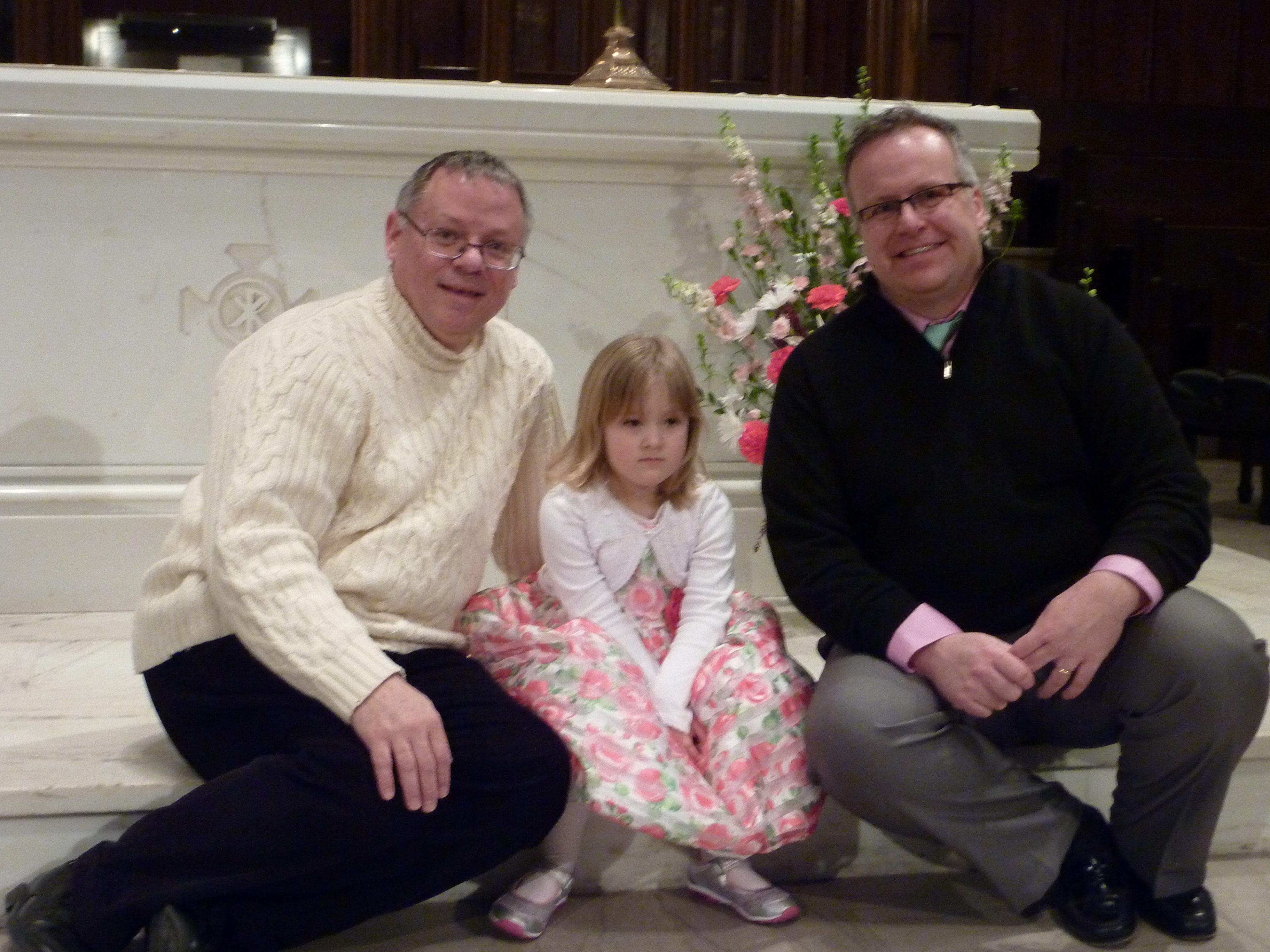 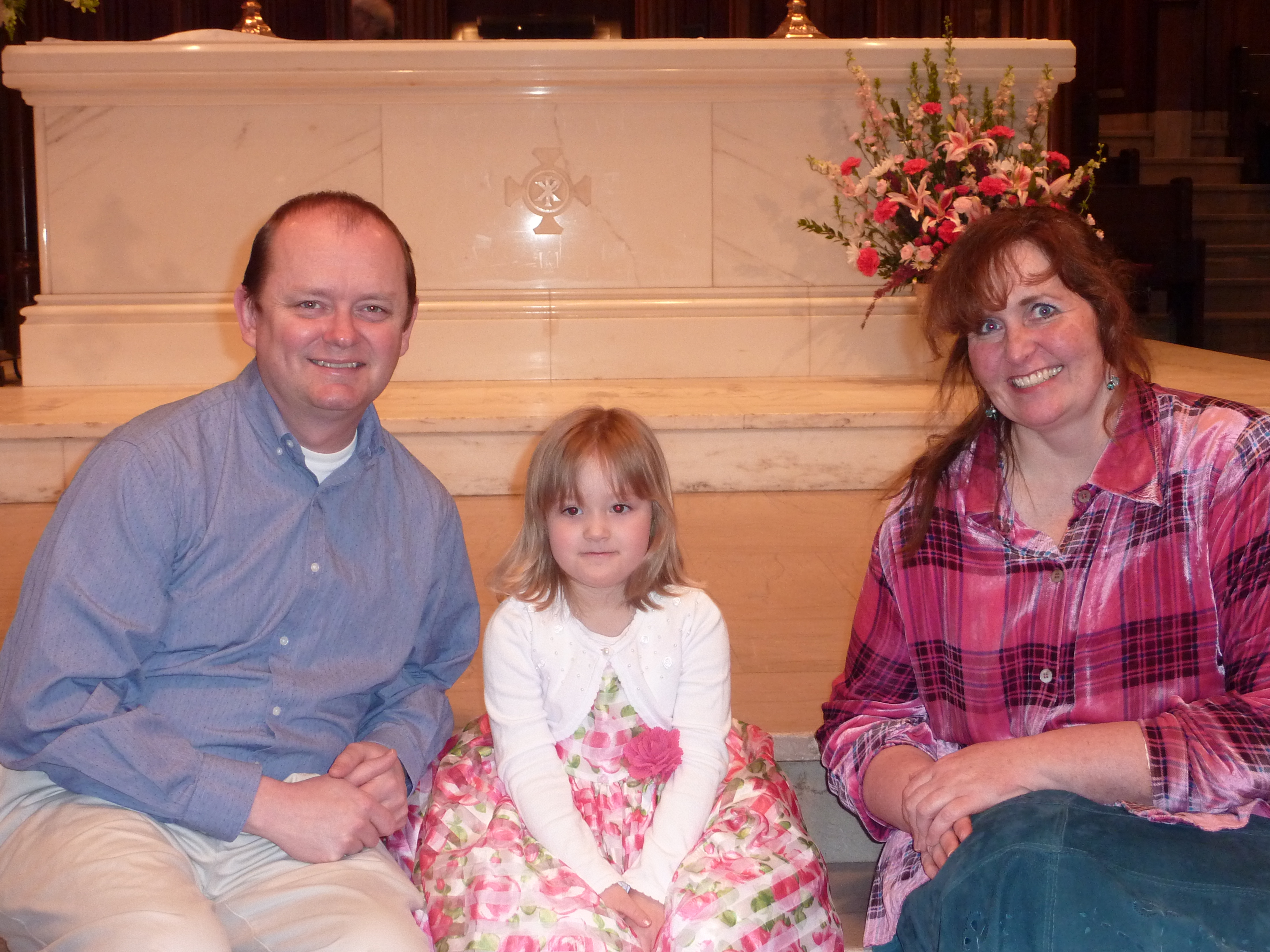 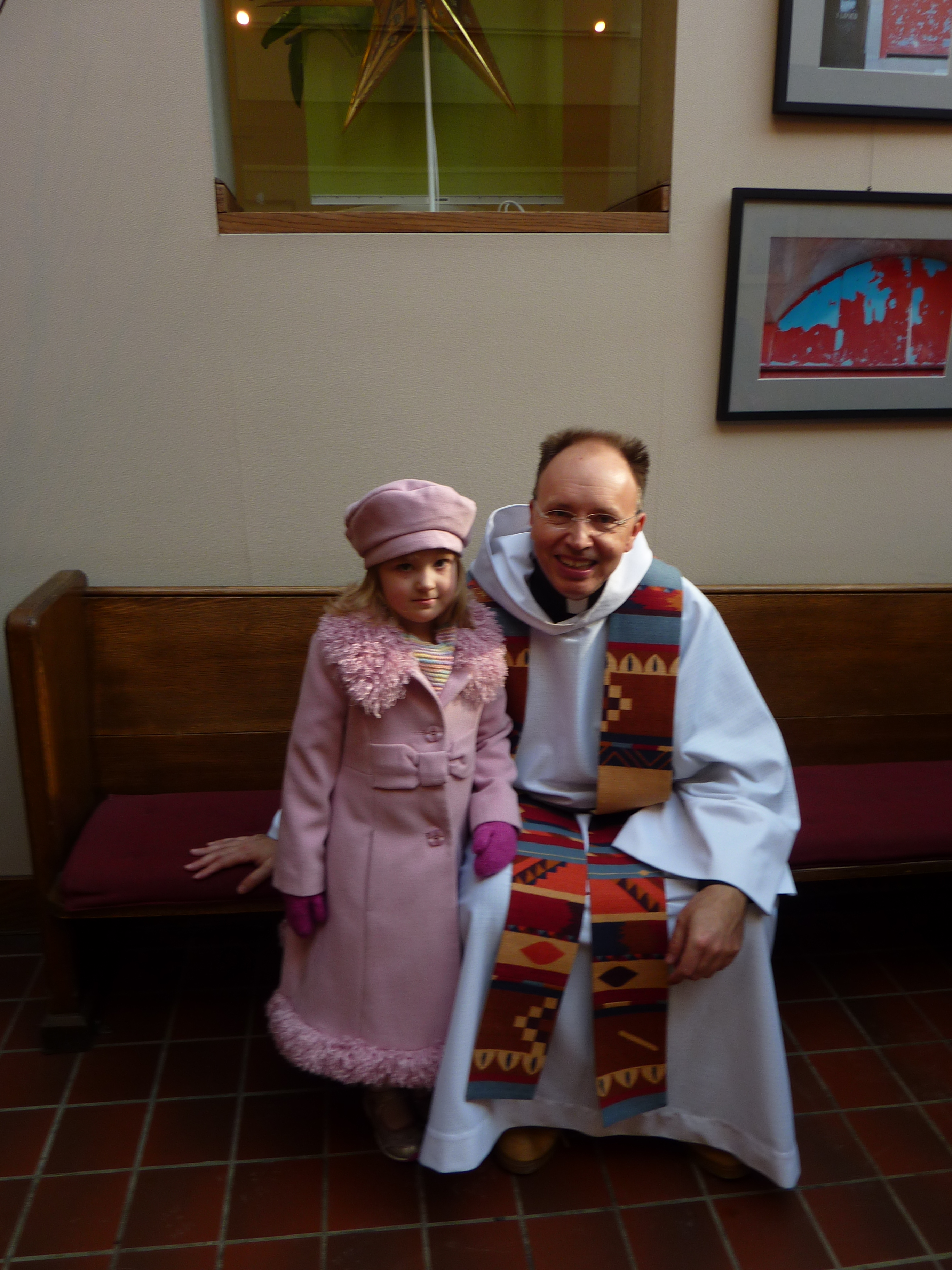 … Shopping the downtown farmer’s market over the lunch hour with a friend. 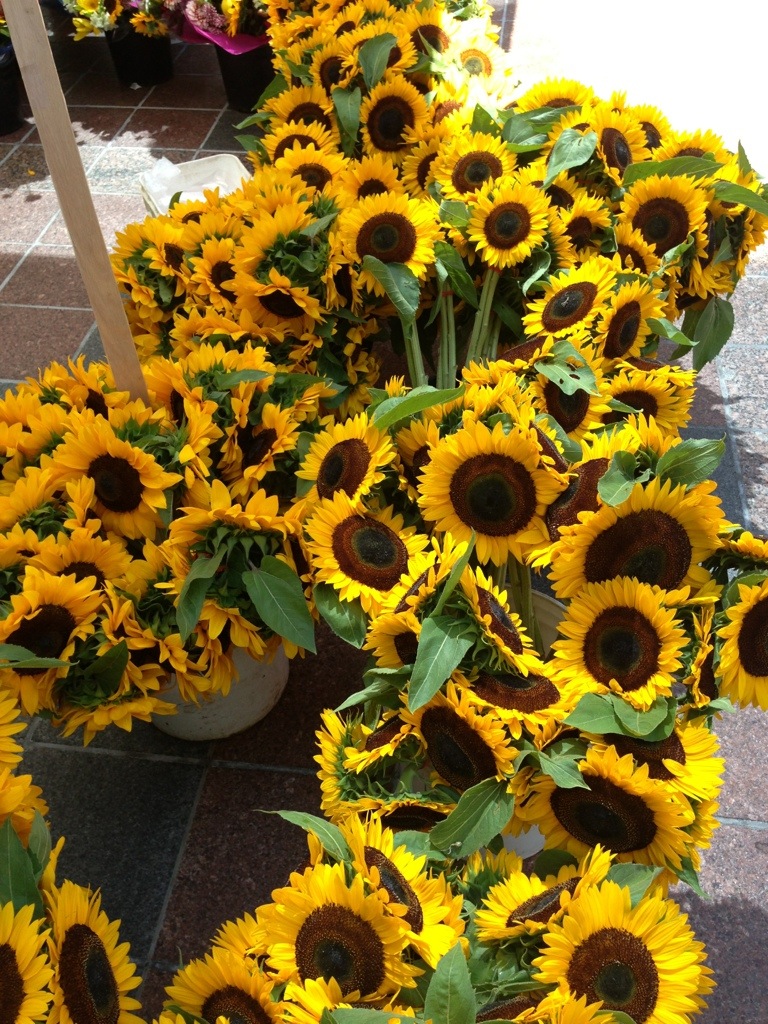 Got this table runner made last week too. And you know what? I LOVE making table runners, and they are good for practicing my machine quilting skills. 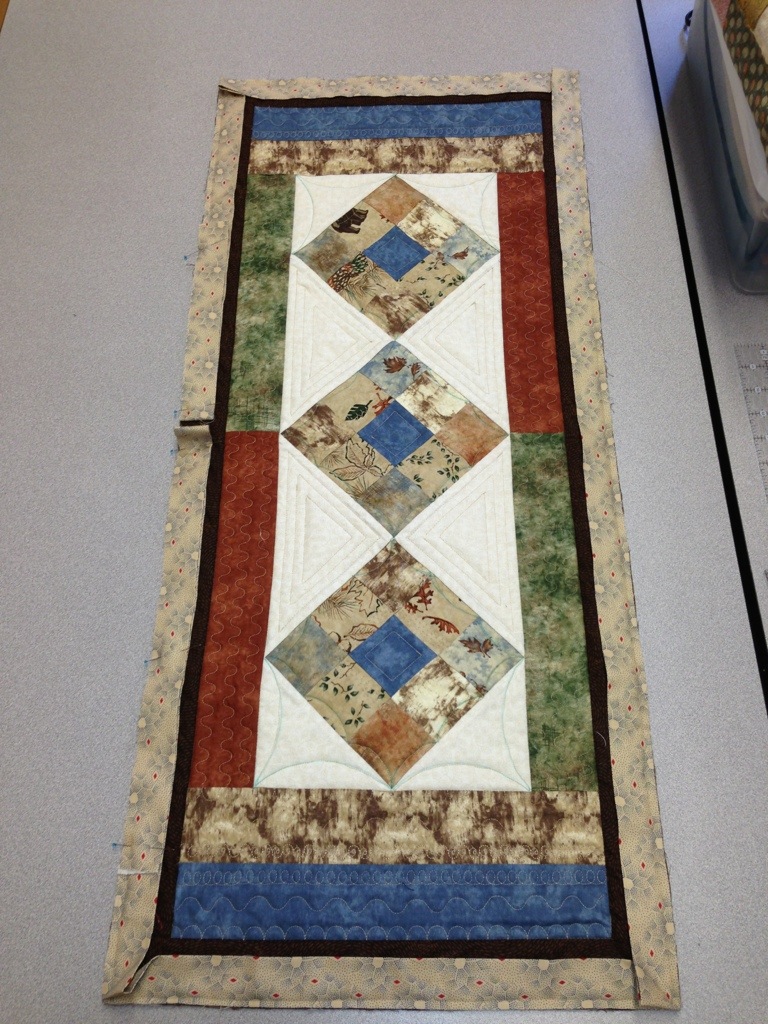